A couple of years ago I hacked a few Vectrex's, 3 for a colleague and one for myself. Here is a simple documentation of how I did it.

The Vectrex is a vector display-based home video game console that was developed by Western Technologies/Smith Engineering.[1] It was licensed and distributed first by General Consumer Electronics (GCE), and then by Milton Bradley Company after its purchase of GCE. It was released in November 1982 at a retail price of $199 ($480 adjusted for inflation[2]); as Milton Bradley took over international marketing the price dropped to $150, then reduced again to $100 shortly before the video game crash of 1983 and finally retailed at $49 after the crash.[3] The Vectrex exited the console market in early 1984.

Since the Vectrex is a vector display, it lends itself for generating waveform imagery; more than a few artists have modified the Vectrex to feed it signals to make waveshape patterns. To get the image back into video you need to rescan (rephotograph) the Vectrex display. The vanilla Vectrex has limited bandwidth, though there are ways to use it display modified video as well, but that the subject for a future article.

First take the back panel off your Vectrex by removing the 5 screws: 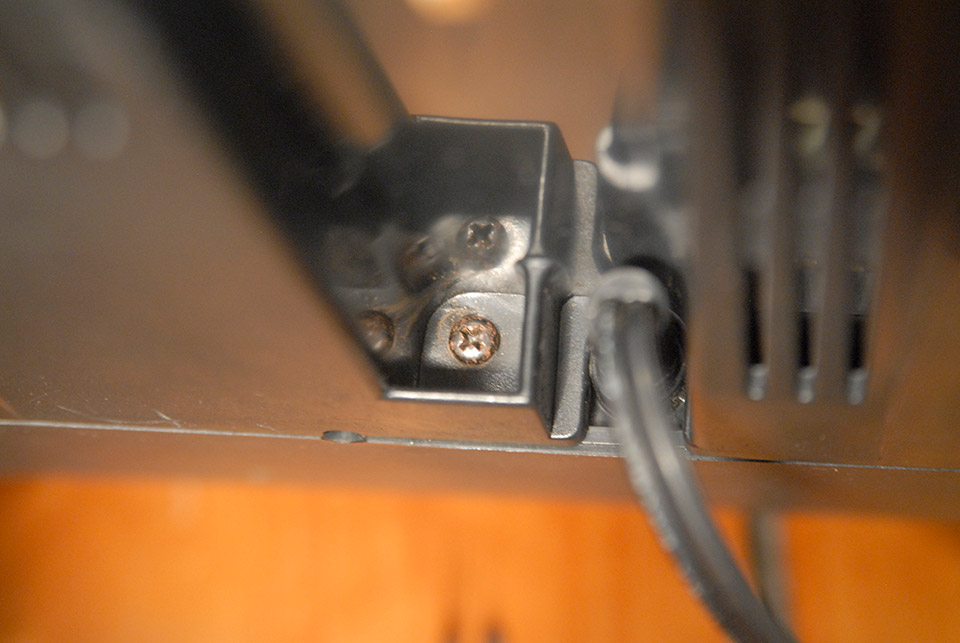 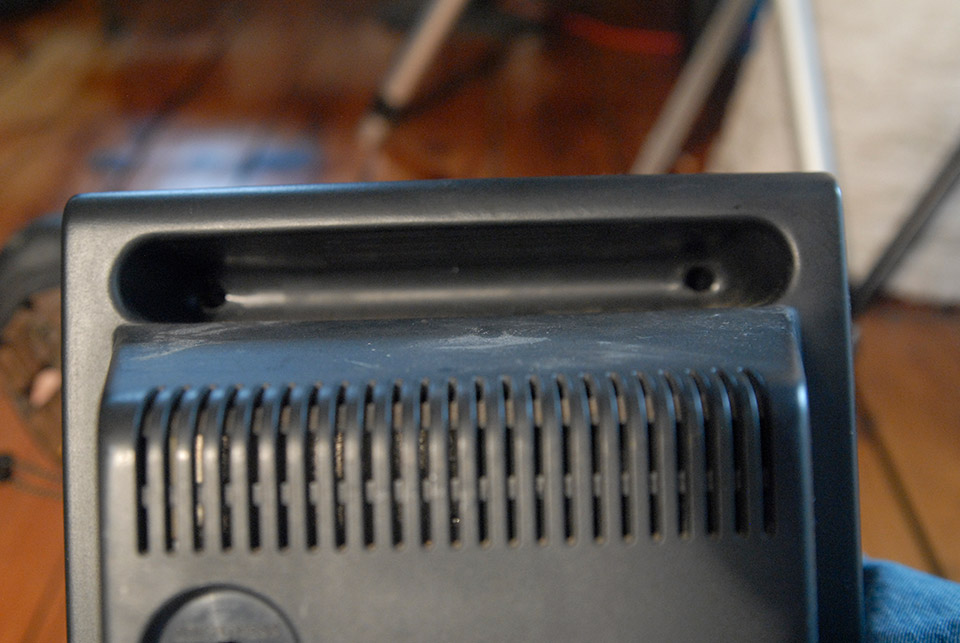 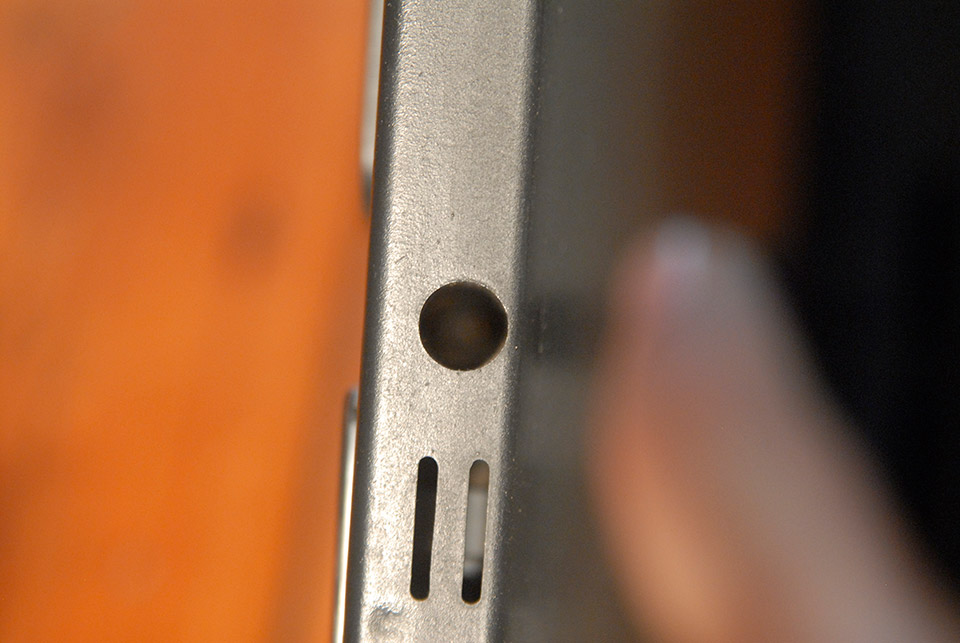 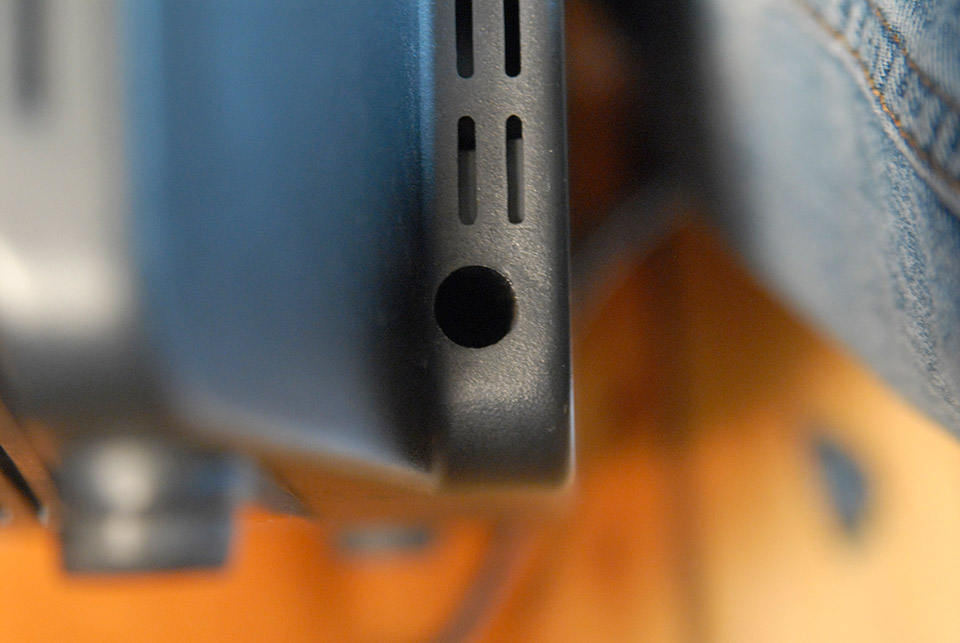 After removing the back case find a place you would like to add your 3 jacks. You can see I put them in the place that would not interfere with Vectrex circuitry. This image shows the jacks from the inside after wiring. Use your ruler, drill 3 holes, 1/4" for mini jacks, and attach the jacks. Then wire the grounds together. 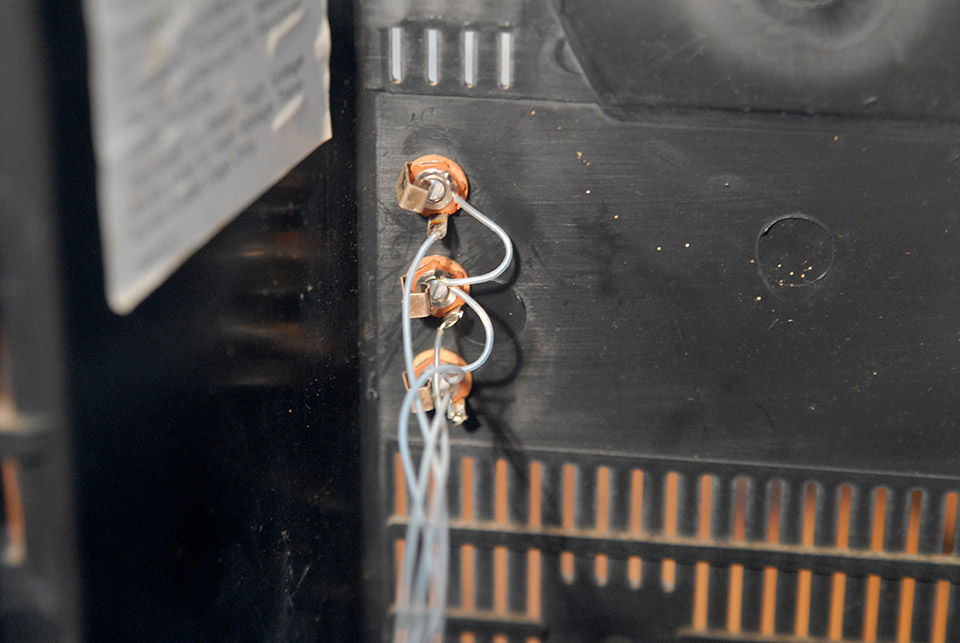 On the Vectrex find where 3 wires attach with a white connector to the bottom circuit board. It's at the bottom right when the screen is facing away from you. Remove this connector. 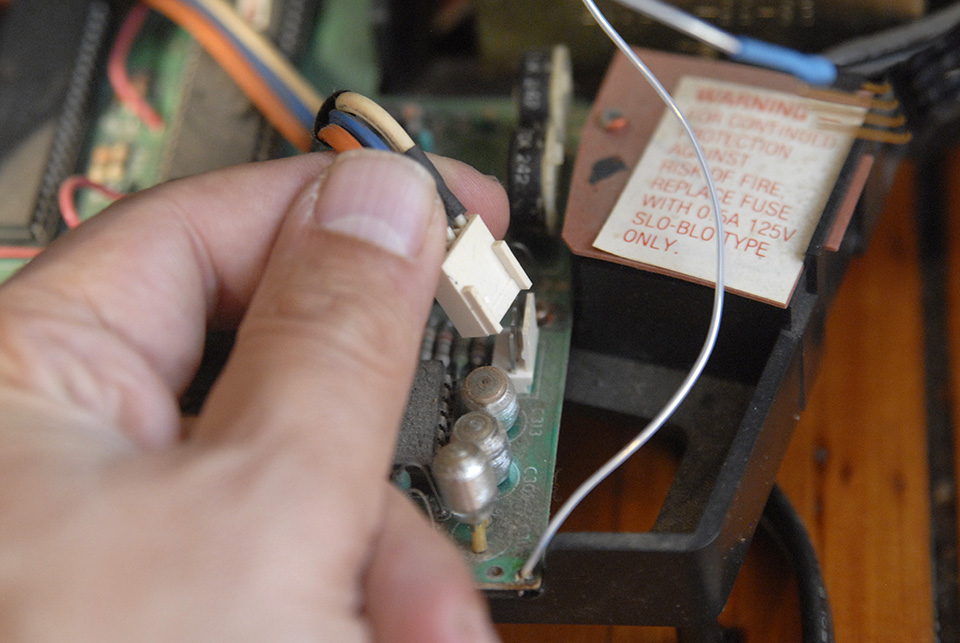 You are going to need a ground wire so solder a wire to the corner hole near the connector block as shown. This hole is over a ground trace on the circuit board. 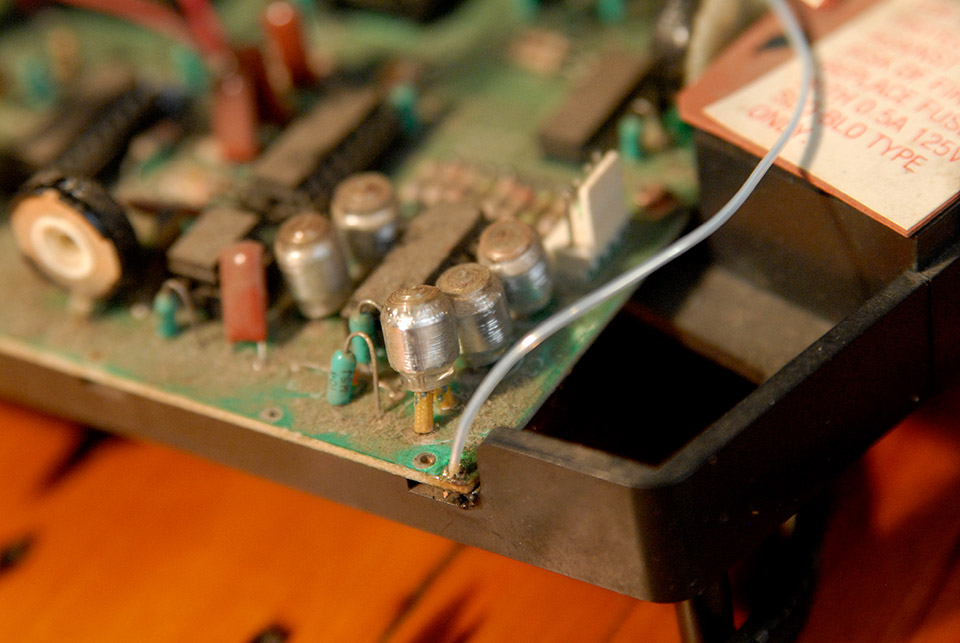 My approach is to create a connector that will mate with the white block that the wires are attached to. This way, if you wanted, you could easily put your Vectrex back together at some later point. If you prefer you could just cut the wires and extend them to the mini jacks. Another advantage of using a connector is that you can separate the cover from the chassis if needed, rather than having them always tethered. I created a 4 conductor mate that has a the forth conductor outside the Vectrex block for ground. Attach the ground wire, using heat shrink, to the far connector. Then solder 4 long wires that will extend and solder to your jacks. One at the end goes to the grounds for all 3 jacks. The other 3 wires will go one to each jack. I wired my jacks from top to bottom, X, Y and Z. The wires should be: orange: x, blue: y, and white:z. Use heat shrink, you want to avoid any shorting and these wires are in close proximity on the connector. 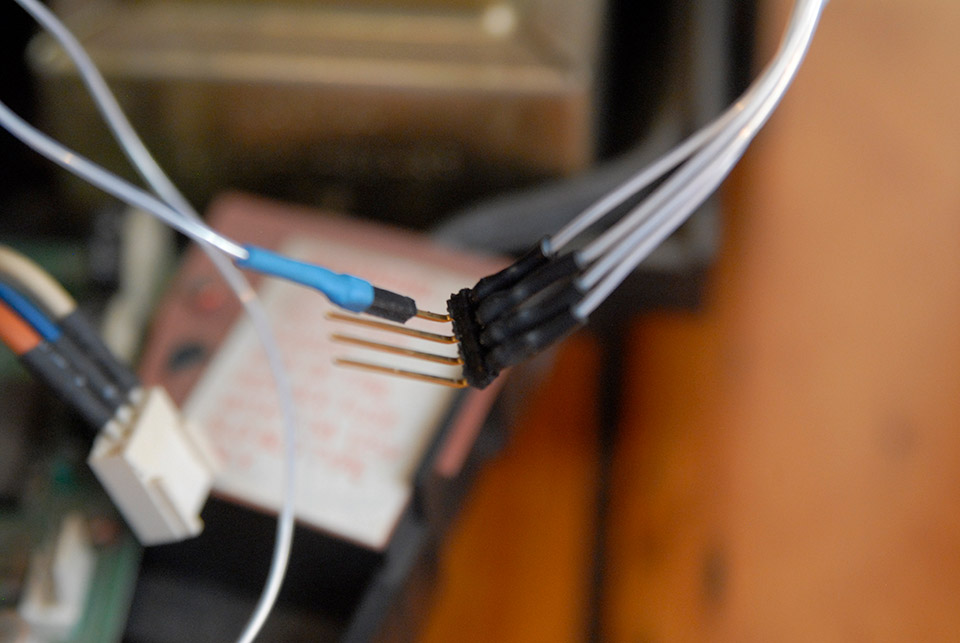 Attach the block to your connector. I wound some black tape around the connectors, so no chance for it to come apart or short. 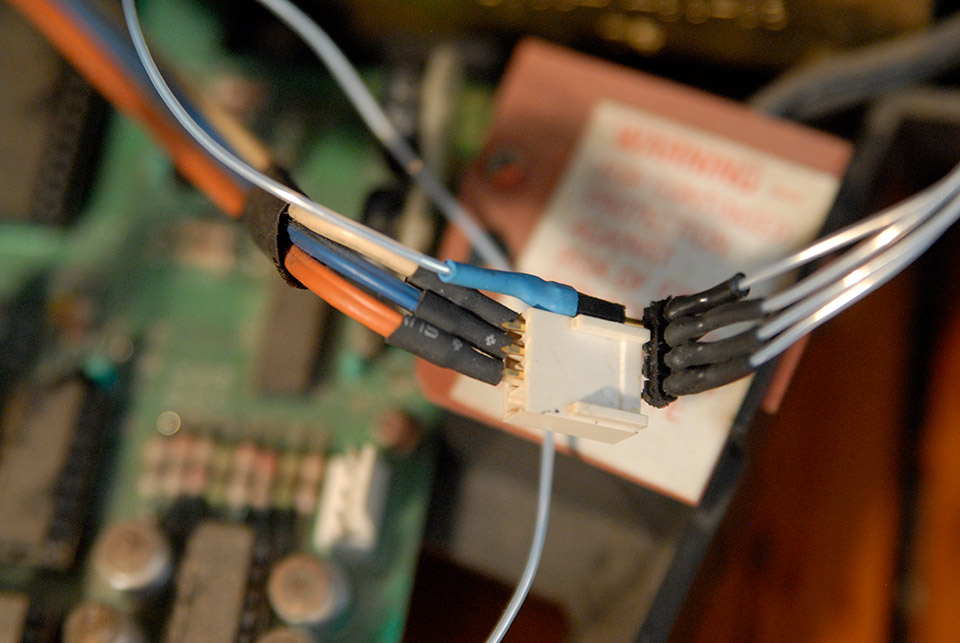 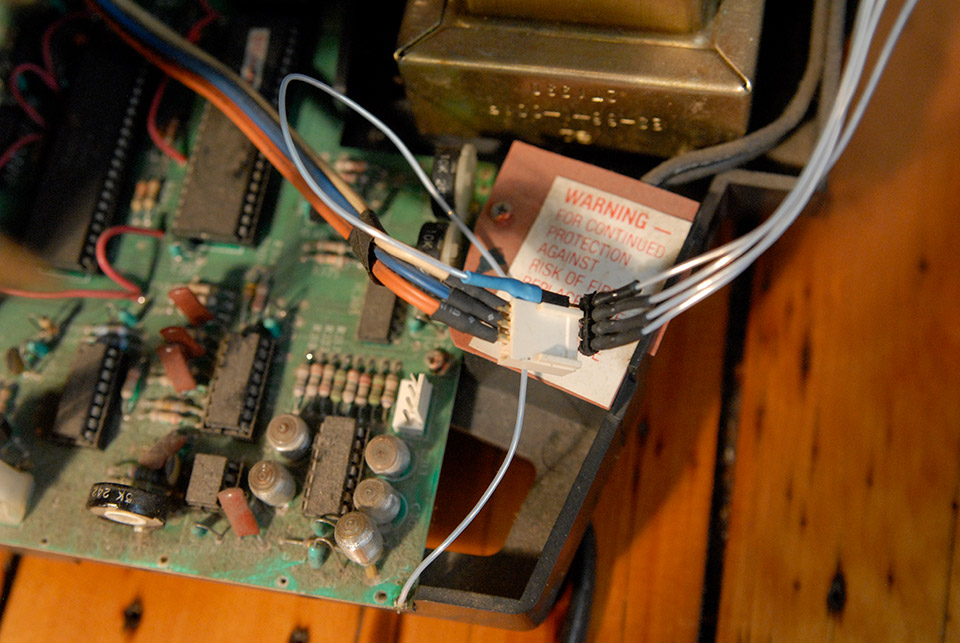 I have applied +-5 analog signal directly to these inputs but to be safe use attenuators to knock down the voltage as needed. Attenuators will also allow you to adjust the relative affect of each input. A next better approach is to build the attenuators directly into the side of the Vectrex. Use 10K pots ( I had 4K pots on hand), attach ground from the jacks to the CCW end of the pot (notice I bused a wire from the ground on the one of the jacks to all 3 pots) and the signal from each jack to the CW end of it's corresponding pot. The X, Y and Z leads from the Vectrex would attach to the wipers of each pot. 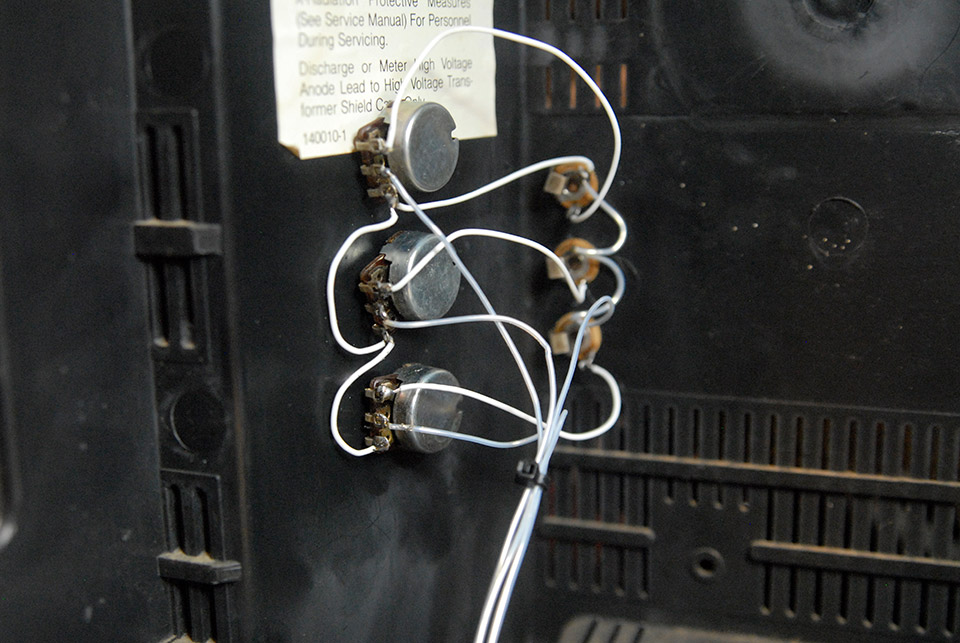 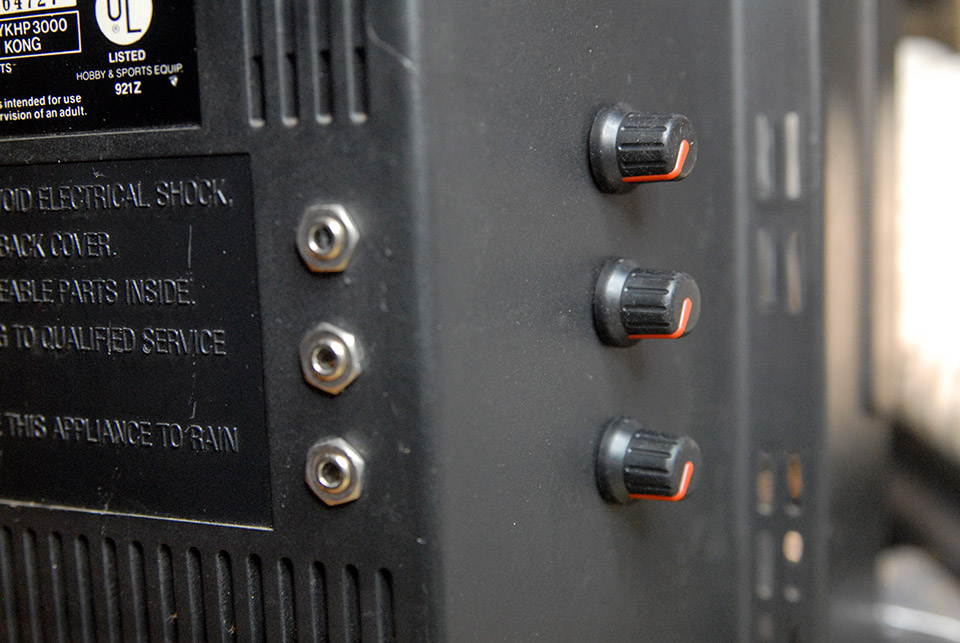