I recently published an ebook application for the iPad authored by Laurie Needell and myself. You can find this application on the App Store.

The app contains original 3D photos I shot on New York City’s abandoned quarantine island, North Brother Island. It includes three different modes to view the photographs: anaglyph 3D (use your red/cyan 3D glasses), wiggle stereoscopy, and stereo pairs for free viewing. The app also features brief histories of Riverside Hospital, Typhoid Mary and the General Slocum steamboat fire, and a description of how I came to be on the island, as well as an appendix about the 3D including a description of Alfons Schilling's work, the artist who first discovered wiggle 3D.

This iPad app is easy to use; it's really just a book. I first imagined it as only using wiggle 3D, but instead of a fixed wiggle 3D as is often seen with animated GIFs, I added two sliders. One slider controls the frame rate of the wiggle animation, the second controls the convergence. I had written an app to do this in Director/Lingo many years ago but I never published the work. Back then they were called CD-ROMs. At that point I was going to publish Keystone and Underwood and Underwood prints from my collection. I even had a local museum photography curator interested.

I had shot these photos on a trip to North Brother Island I took with Benton Bainbridge. The proposal that got us on the island was for a Bainbridge/ Maguna production concept. This evolved into Brother Islands, a multimedia performance that had one show at Eyebeam in NYC. I took part in the performance, displaying these photos, as well as stills and video I shot, on two of the screen using a live VDMX patch that rendered the stereo photos using wiggle 3D. There I played with the speed as well as the shape of the waveform determining fades or cuts.

I later decided to make an app using the same photos, though I wanted to place them within a more traditional documentary context. While working with Laurie Needell, the project evolved, adding pages and pages of history content about the island, more than I originally anticipated. For one thing the amount Laurie wrote demanded I include more photos than I would have otherwise included, our editing giving way to balancing the scope of the text. As time went on and we tested the app we found that many people really didn't like wiggle 3D. Laurie and I were constantly surprised. Some people wanted it to stop. It was dispiriting. Wiggle 3D is a much more subtle way of seeing 3D, yet still, here is 3D without any glasses, a method that a one-eyed person can see. We did find that when people stayed with it and gave it a chance, they usually came around.

After some time I decided to give people what they want, and I added anaglyph and free viewing modes. Vertically swiping on the image became an obvious solution for changing between the modes, I wanted to keep the buttons and controls to a minimum.

Also in the context of keeping the controls to a minimum, I removed a control I originally intended to include to allow the user to change between cuts or dissolves. Usually wiggle 3D is shown with cuts. I have grown to prefer dissolves, though here I weighted the dissolve to leave more time with a static image, and less time in the transition.

I programmed this app in AS3 using the Flash IDE. I did not use Starling on this one. The animation began as a greensocks tween when I first prototyped it, however when I optimized the code I took out the tween in the wiggle 3D display class, instead using concise methods. I also started this as a dynamically scrolling app, but found that again, for the sake of optimization as well as avoiding potential bugs, I ended up using swipe gestures to trigger a scrolling tween (greensocks). I wrote a custom swipe gesture as I found the built in gestures to be problematic.

When I finally published to my iPad 1, I found a vast difference in performance between my Mac and the iPad. After banging on it for a while I found that animating wiggle 3D on a page with text took a big hit because of the presence of the text fields. After several experiments I found the only way to get reasonable performance on an iPad 1 was to convert the text to bitmaps. All text, even the page numbers, were all converted to bitmaps. By doing this the fps went from below 1 fps to about 12 or 13 fps, sometimes higher.

I also built tools so that Laurie could write and flow the text directly into the app, thereby making precise page breaks and seeing how it looked in context. The text was stored in xml, and each field had a dynamic test to see if it used a CSS or not. This made editing much easier for Laurie. 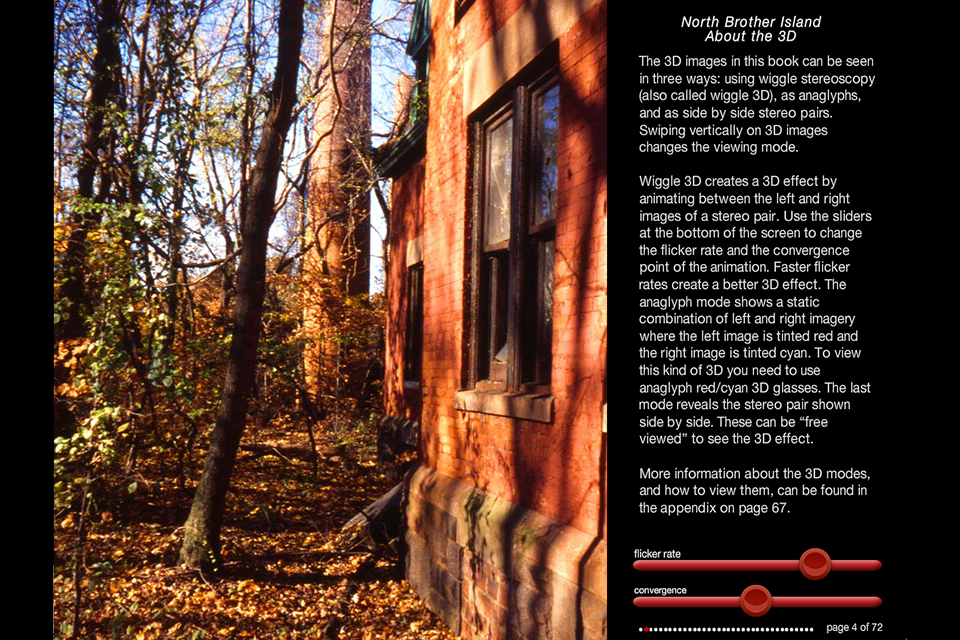 The following link can be used to download a Desktop version of the North Brother Island application. No accommodations have been made to alter this tablet app for Desktop. A cursor icon has not been set and you will need to use your mouse to swipe as you would on a tablet device. This has been provided in the case that we do not update the tablet versions in time, or if you don't have a tablet. Running North Brother Island on a tablet is the preferred experience.