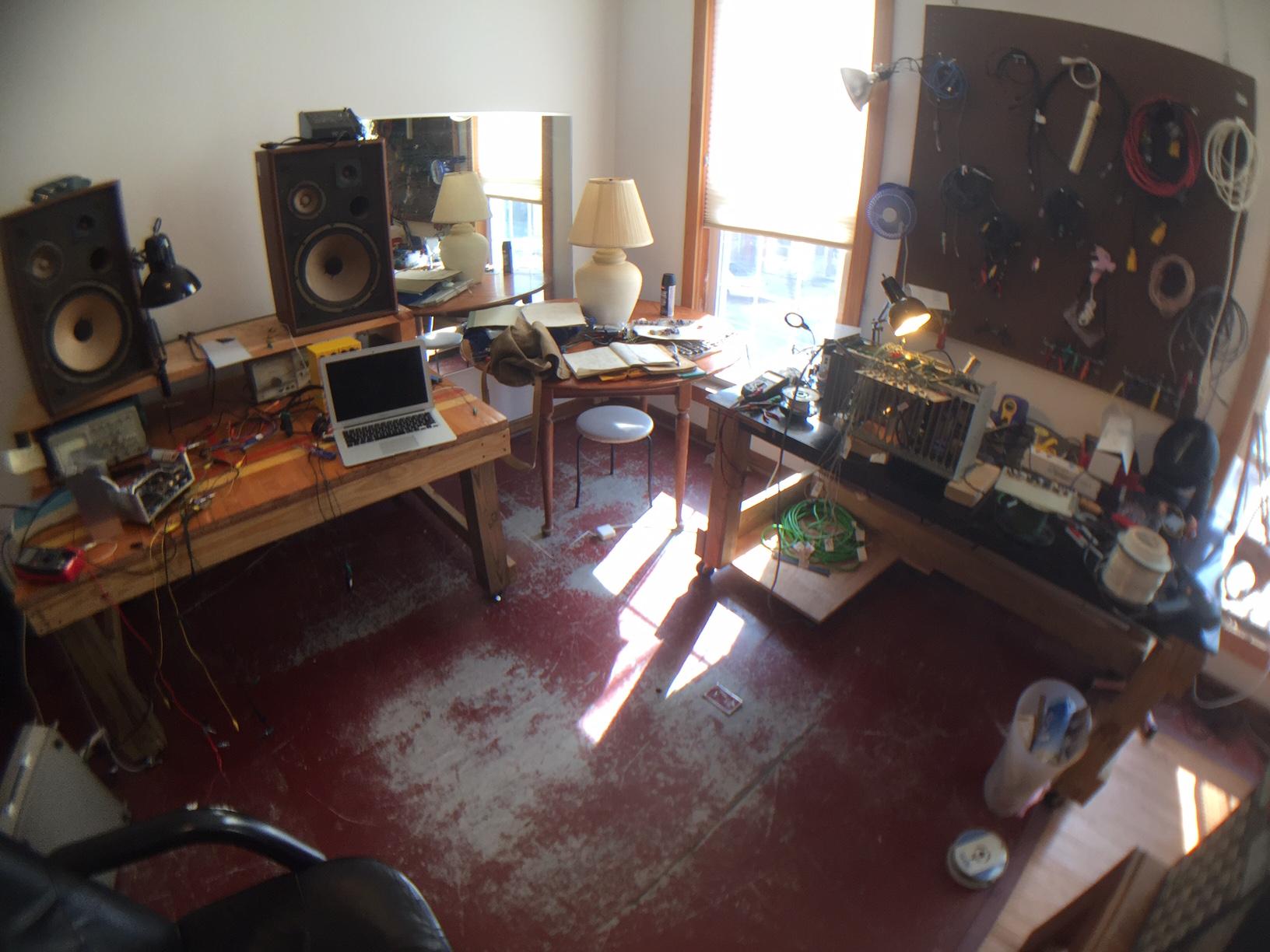 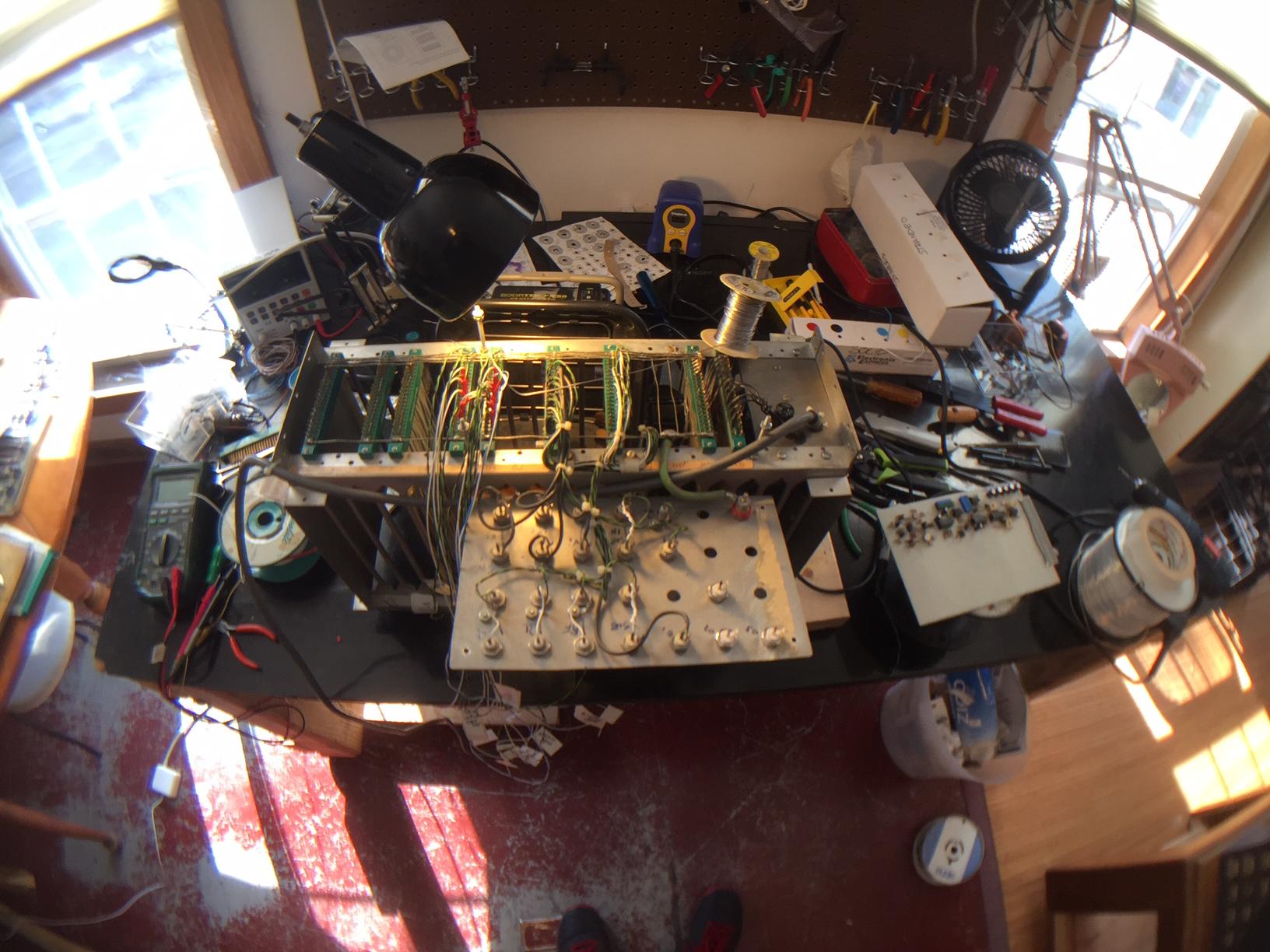 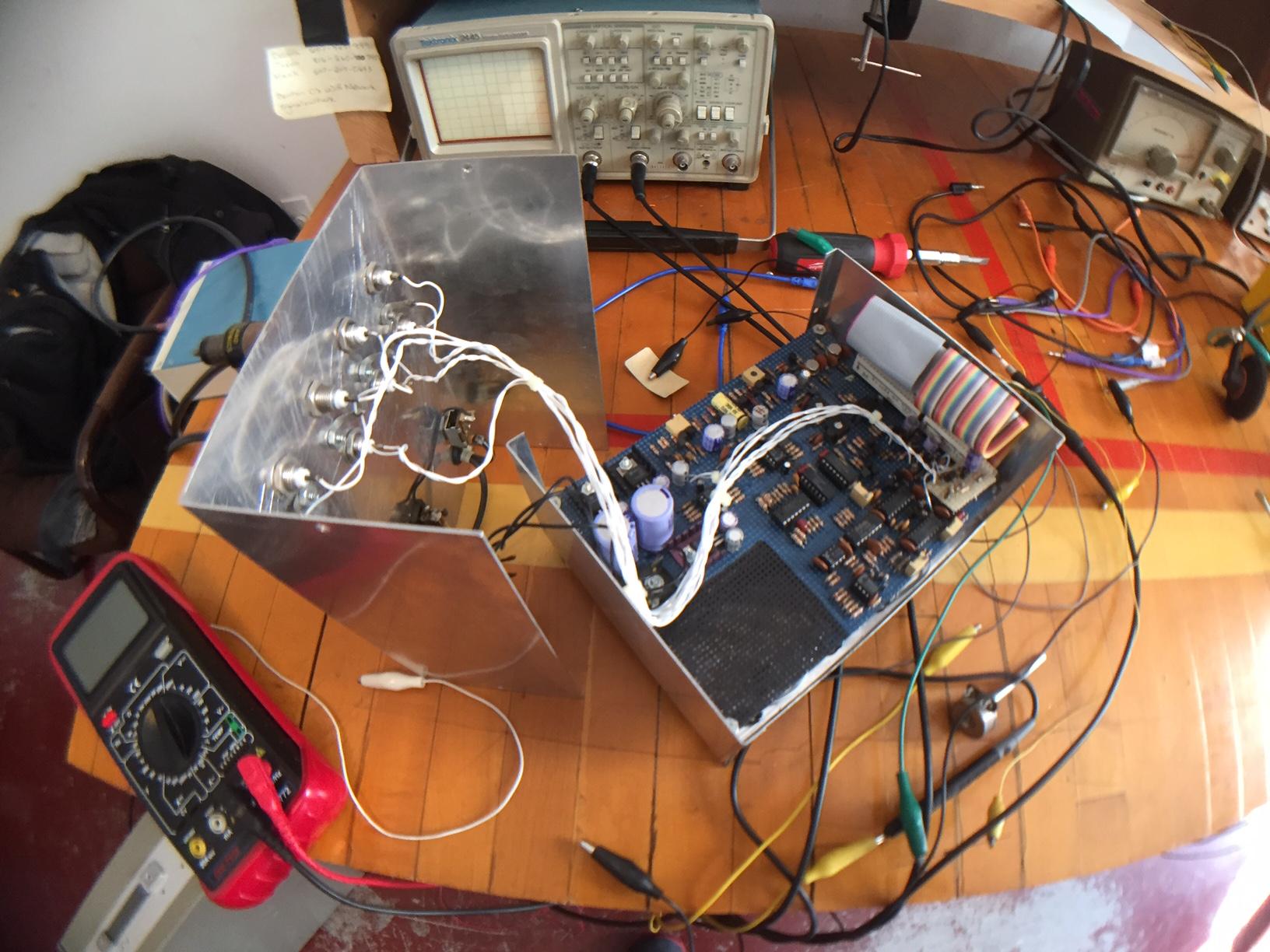 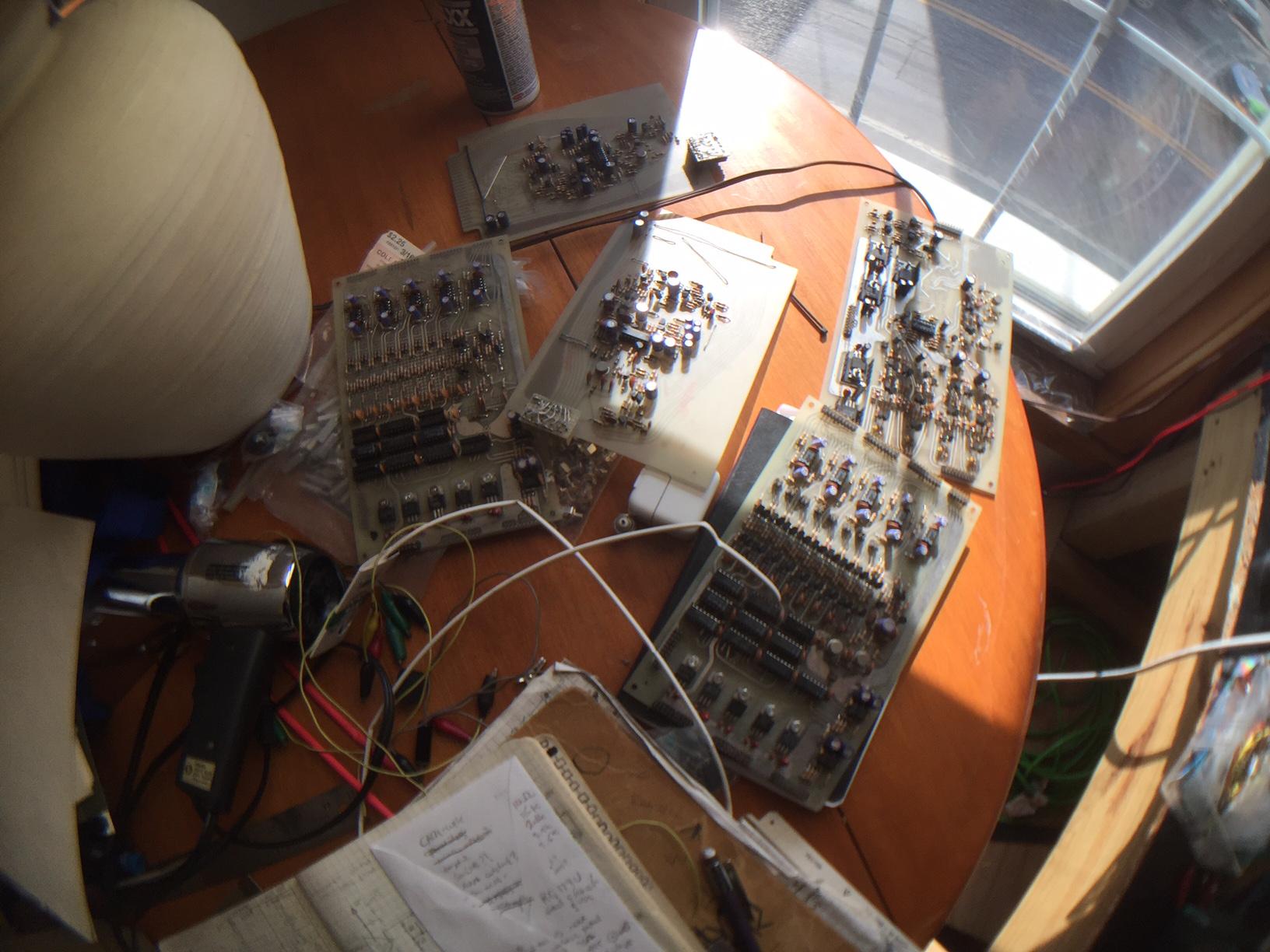 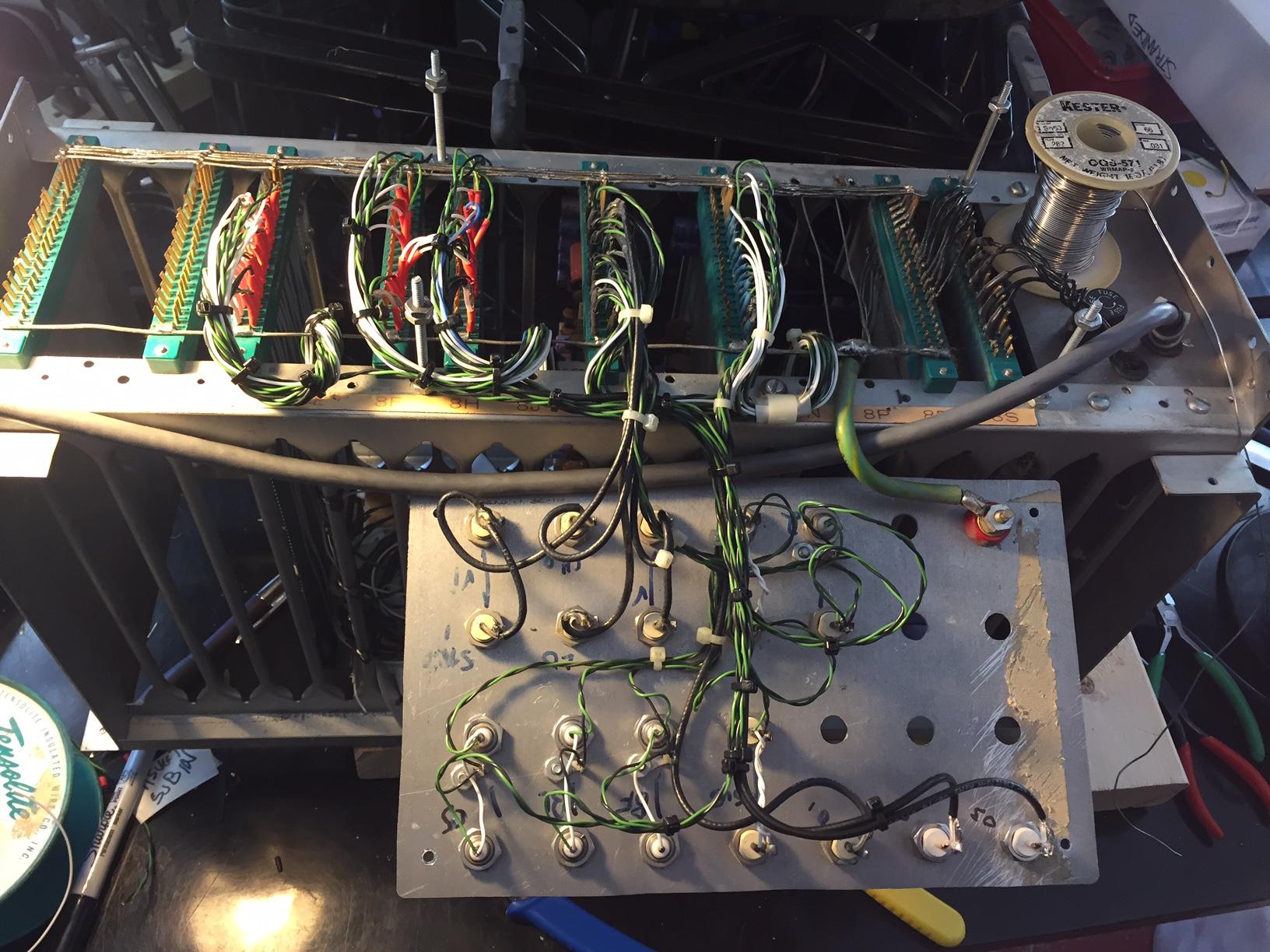 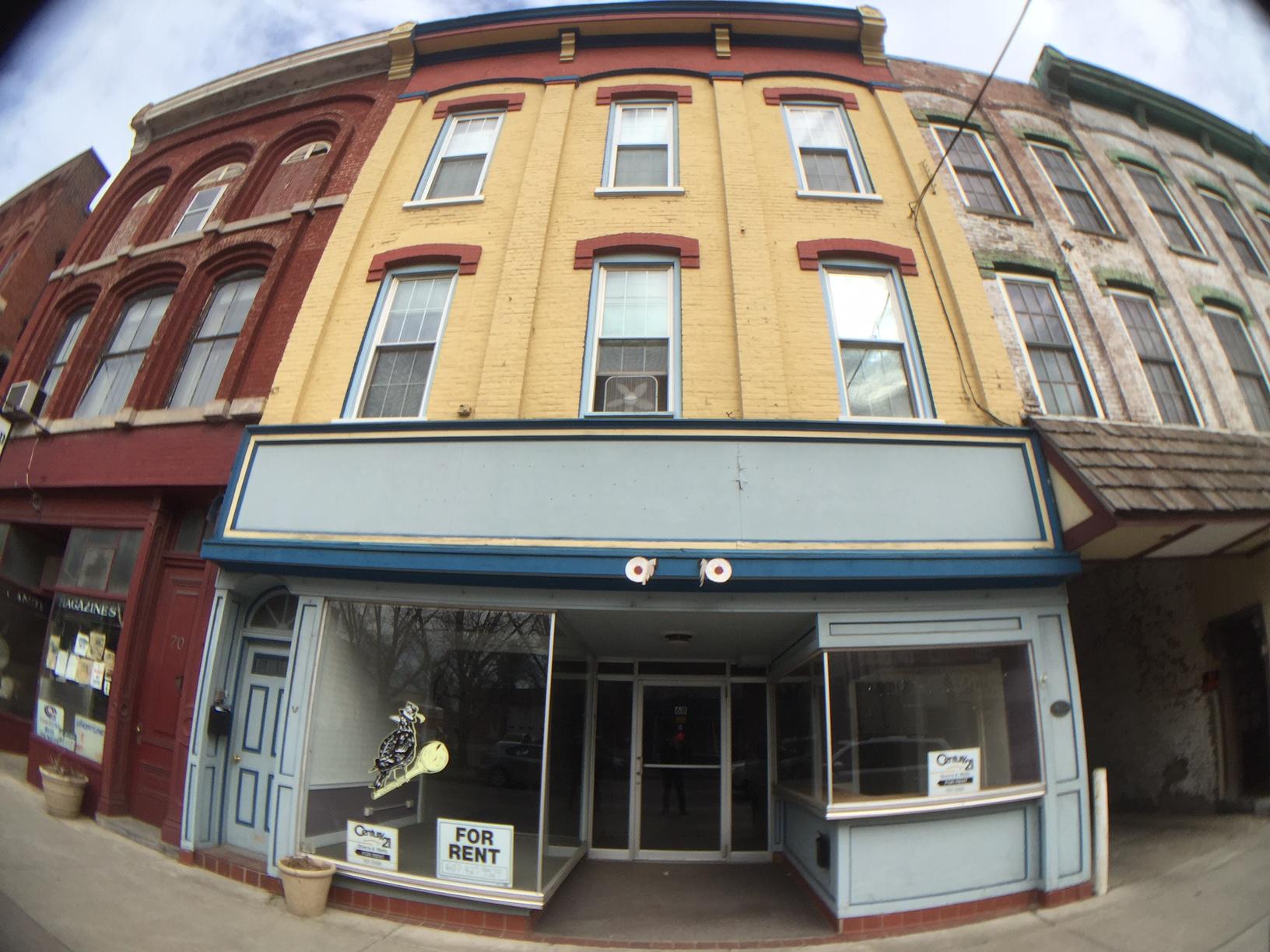 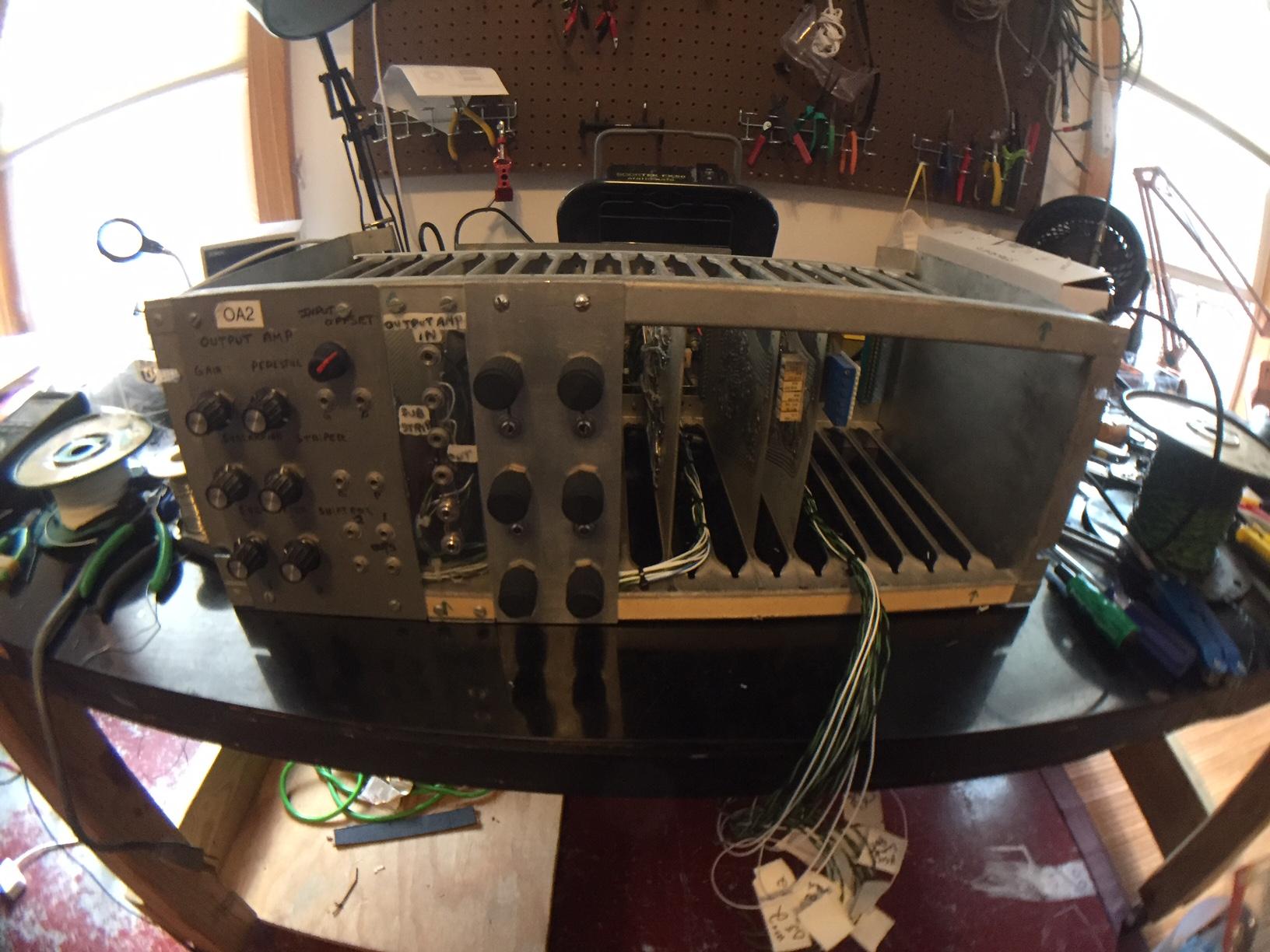 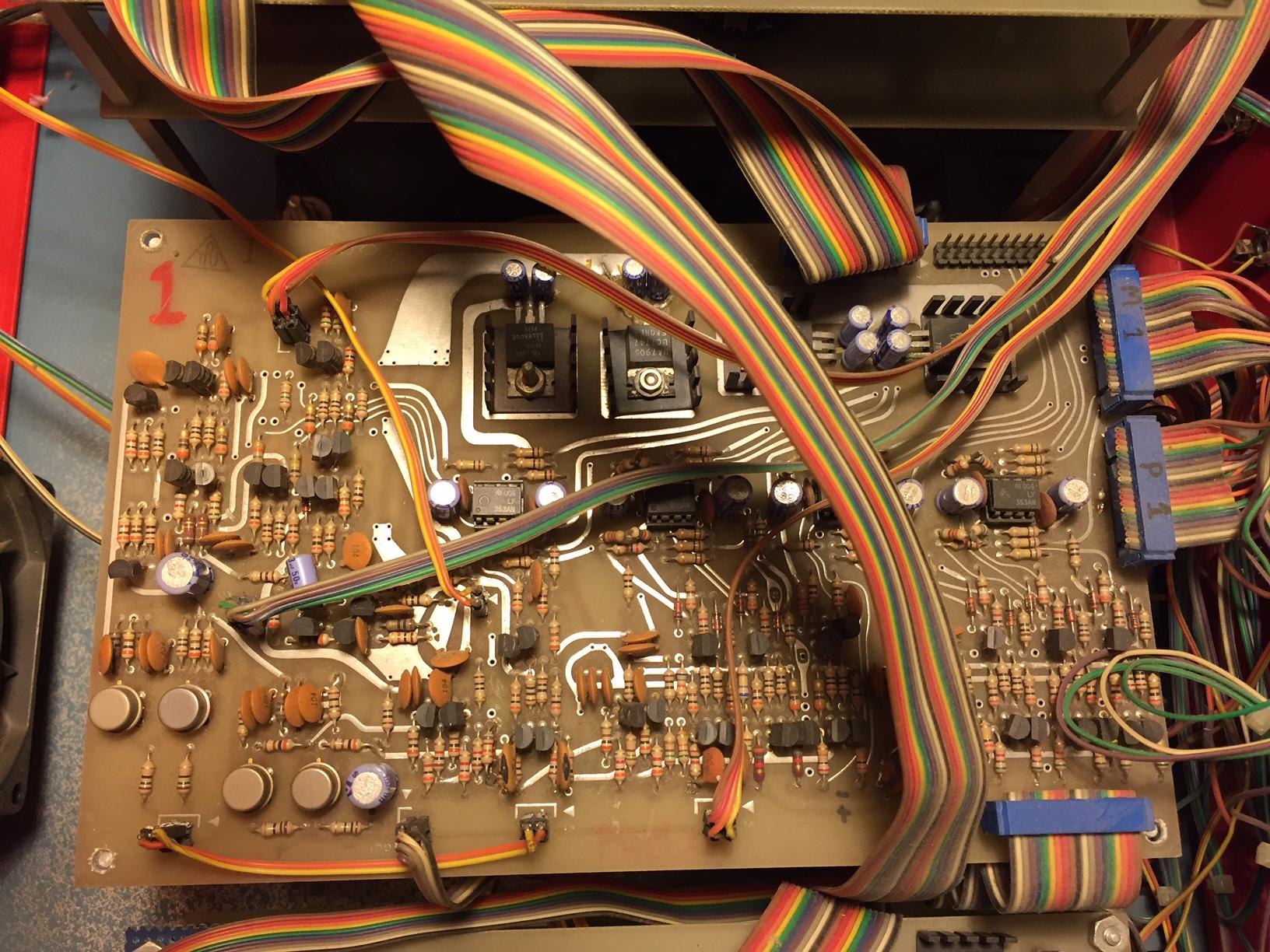 I am wrapping up a week at Signal Culture doing a tool residency. Signal Culture is a special place, thank you Jason, Debra and Hank for making this happen and keeping it going. David Jones has been really genrous with his time, in part the residency was an opportunity to spend time with David and Hank Rudolph.

Adding in the output amps and building HSV modules was the first piece of unfinished buisness sitting on my desk for decades. Most of my time at Signal Culture I spent working on a utility rack I had built several years ago to hold two subcarrier phase shifters, an input amp (with a color kill), and an output amp. It was an open rack and had space to add more which I always planned to use. Unlike other tools with painted and lettered panels, this rack has been a bare metal and Sharpie affair. I have 2 other Jones output amp boards, one loaded many years ago, the second loaded within the last 5 years, and panel has been sitting around a few years to install and make them usable. The right way to do this, though, is to include a subcarrier phase shifter for the burst on each output amp. The two subcarrier phase shifters in this rack have been used for colorizing, and they are ok, but a full blown HSV module would be better. The plan then was to build 2 HSV modules for colorizing and then use the 2 phase shifters for the 3 output amps (maybe later add a 3rd). I designed the HSV module, using a phase shifter designed by Terry Mohre, which I beefed up some, and then made several changes with David Jone's great help. I built wired and tested the module, then another long session with David helping with debugging and more modifcations, many of which I will apply to the existing phase shifters. I only had enough time to wire one HSV module, but layout for the second one will go more quickly after all the trimming (the second one went together the follwing weekend, including trimming). The saturation stage uses a MC1445, I had recently found a couple on EBay. I know the world has moved on, but the MC1445 was a great differential video amplifer. We used it a great deal at the ETC. One thing I learned is that the gate pin has a voltatge divider that will pull up the voltage at the pin requiring more range and trimming, don't just set up your buffer for a perfect 0 - 1.25V. I also learned a good deal about differential amplifiers. Everything here is voltage controlable so one will be able to shade color using analog shapes.

One note, my system is still 2vpp differential for all video, and as the subcarrier from the HSV module is patchable subcarrier used for colorizing by adding it into video-rate pedestal and gain inputs on keyers and such, it is also differential, though I set the amplitude up 40% for good measure. This is one aspect that I might further trim after getting this in to my system and seeing how it works with other modules.

My video modules come from the Dave Jone school and back in the day the keyers were all hard edge using LM710 ,and later LM360, comparators. Building a soft edge keyer is the second piece of unifinished business. About a year ago I loaded a Jones keyer board (circa 1984) leaving out the comparator stage with the intent of making this a soft edge keyer. I like this board, the proc amps for each channel are great. It's really clean. I designed a amplifier stage to replace the comparator, again using an MC1445, and some trickery for including normal-reverse and on-off switching. Again David provided some design help especially with the latter. I didn't have time to build and test this, but I will do that hopefully in the coming months. I did design drill and include a front panel for the keyer on the same panel being used for the HSV controls.

I have been thinking about the Jones colorizer, I used it once again at a Signal Culture resdidency over a year ago. I always intended to build one and the empty case on my shelf attests to good intentions. I thought the boards were all gone. And no one has complained about the colors in my work using the method described above, patching subcarrier into pedestal controls of proc amps. It turns out there were 3 channels left in David's draw and I am taking them back to Nyack to load. This will be a long term project. In the 80s I built the 6 channel colorizer that was at the Experimental Television Center, and it was a lot of work, a lot of wiring. Three channels will be just fine. To prepare for this I pulled down a colorizer off of David's shelf and pulled a channel and mixer board and took many pictures. Then David did the same. The modifications are many. We both plan to document the mods as much as possible. Thoughts on this go to how to build the interface. I don't have a lot of space for more table top devices so I am thinking about building this into one of the card racks we used to use at the ETC, if there is enough panel space.

Finally I also designed a possible panel for a Jones sequener (also circa 1984). I have one I loaded 20 years ago and am only now working up to putting it in a box. We reviewed the layout options a bit and I laid out possible panel for it that just fits into the same rack with the HSV and keyer modules. Rather than squeeze it in, I will likely put it another box.